New Release: Courting Trouble, an In Love and War story

And today, I’m happy to announce Courting Trouble, the third story in the In Love and War series. Whereas both Dreaming of the Stars and Graveyard Shift are prequels of sorts, Courting Trouble features Mikhail and Anjali as an established couple on the run from their respective regimes.

The seeds for the In Love and War series were laid sometime last year, when a scene popped into my head: Two intergalactic mercenaries, a man and a woman, bantering while walking through a grimy spaceport. I knew at once that they were a couple and that they came from very different backgrounds which they had left behind to be together. They worked as mercenaries now, not because they wanted to, but because it was the only option left open to them. They were also on the run.

I was intrigued by the bantering couple, so I started writing. As I followed them through the spaceport, I learned a lot more about them: Their names – Anjali Patel and Mikhail Alexeievich Grikov – that they had both been elite soldiers on opposite sides of an endless intergalactic war, that they had fallen in love and run away together. I also got, in bits and pieces, the story of how they’d met and fallen in love and what had prompted them to leave behind everything they’d ever known and run away together. It was a pretty good story, so I decided to write it. I worked on that story on and off for several months, while it eventually blossomed into a novel or rather two.

However, I had always intended to give Anjali and Mikhail standalone adventures working together as an established couple. In many ways, Anjali and Mikhail are the ideal candidates for a series of standalone adventures. They are fugitives working as mercenaries, hopping from planet to planet trying to evade their pursuers. This gives them the opportunity to have a lot of different adventures on different worlds, solving other people’s problems, while trying to stay a step ahead of their own. Hey, it worked for Dr. Richard Kimble and the 1970s TV version of The Incredible Hulk. It’s still working for Jack Reacher.

Then July came along and I decided to take the 2016 July short story challenge. At this point, Mikhail and Anjali had been living in my head for several months. And while I was looking at SF concept art, trying to spark ideas for the story of the day, I came across this image and thought, “That place would make a great setting for an Anjali and Mikhail story.”

So I started writing and sent Mikhail and Anjali shopping. Or rather, I sent Anjali shopping, since Mikhail merely tags along. It wasn’t long until they found trouble or rather trouble found them.

By now, it has become something of a pattern that the In Love and War stories all have pretty extensive descriptions of food and Courting Trouble is no exception. I’m not sure why I write about food so much, both in this series and elsewhere, except that food is an element that’s traditionally missing in a lot of science fiction or is reduced to things such as food pills or protein sludge, which few people would willingly consume.

Food is also significant for Mikhail in particular, because his deprived childhood (chronicled in Dreaming of the Stars) has left him with massive food issues. These issues come to the fore in Courting Trouble, when going grocery shopping with Anjali triggers memories of Mikhail’s lost family and homeworld, which once again focus mostly on food and drink. 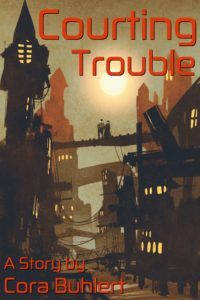 Once, Anjali Patel and Mikhail Grikov were soldiers on opposing sides of an intergalactic war. They met, fell in love and decided to go on the run together.

Now Anjali and Mikhail are trying to eek out a living on the independent worlds of the galactic rim, while attempting to stay under the radar of those pursuing them.

But when Anjali and Mikhail stumble upon a protection racket during a routine shopping trip, they have to make a choice: Lay low to avoid attracting attention or stay true to their personal ethics and intervene?

BTW, if you want to read the entire In Love and War series, there is a series bundle available at a reduced price exclusively at DriveThruFiction.