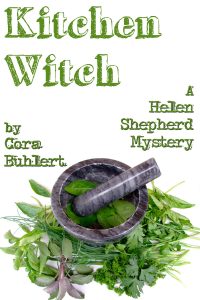 When Eudora Pembroke, a self-styled witch, is found dead in her house after ingesting a poisonous plant, everybody suspects a tragic accident. After all, Eudora was elderly and might have mistaken the poisonous plant for a benign herb.

But Detective Inspector Helen Shepherd is sceptical. Would a skilled herbalist like Eudora Pembroke really make such a beginner’s mistake? And who might have had a motive to poison her?