Children of the Stone Gods 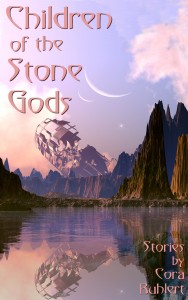 This is a collection of seven tales on the borderline of science fiction and fantasy. Seven stories of lost worlds, where carcasses of crashed spaceships litter the landscape and science and technology have long turned into myth and legend.

Enter a world of sacrifices and stone gods, where people live in the hulls of the great space arks that brought their ancestors to this planet, where four-armed assassins ply their trade and wandering priests warn of great cataclysms, where gods lie sleeping inside mountains and strange lights shine in the sky by night.

This is a collection of seven short science fiction tales of 12000 words or approximately 40 print pages altogether.