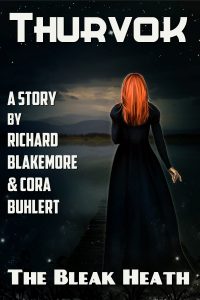 Thurvok the sellsword and his companions Meldom, thief and occasional assassin, and the sorceress Sharenna are fleeing across the Bleak Heath after saving Meldom’s childhood sweetheart Lysha from the gallows. Weary and exhausted, they are relieved to come upon a hut on the heath. But what they find inside that hut may well be more dangerous than the heath itself.

This is a novelette of 10500 words or approx.. 35 print pages in the Thurvok sword and sorcery series, but may be read as a standalone. Includes an introduction and afterword.